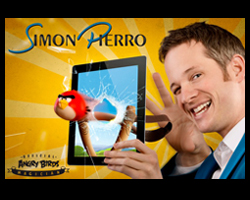 What do you think being creative means?
Being creative brings choices to design your life, ways to better express yourself and approach challenges with the self-confidence of finding new solutions.

How do you include creativity in your life?
My life as a performer and as a private person are melded a lot. It’s because my job is something I would continue as my favourite hobby as well. So I tend to walk through daily life questioning all experiences and impressions, whether they might be inspiring for a new performance or worthy enough to tell my audience.

What thoughts do you have as to how your life has influenced your creative imagination, and how your creative imagination has influenced your life?
To me creativity is driven by positive feelings. Since I was a kid my parents were supportive with any dream I had - not financially-wise (I started delivering papers when I was 9 years old to buy a video camera to finally become a director), but much more importantly building me up when I did not succeed and embracing my efforts.

When I was 20 years old I developed a successful magic act called “The American Dream” which was influenced by a 2-month road trip through the US. This act was different from others as I had help from Eberhard Riese, a theatre director, who taught me how important it is to know the rules before I know how to break them. I learned a lot of techniques from him that improved my creativity.

Today I am 34 and the life I am living is all based on where my creativity brought me. My magic with the iPad brought me more than 10 million views within a year followed by more inquiries than ever before.

What, if any, exercises do you do to get into a creative mode?
Creativity works best with discipline. Let me quote founder of Atari, Nolan Bushnell: “Everyone who has ever taken a shower has had an idea. It’s the person who gets out of the shower, dries off, and does something about it that makes a difference”.

Working without a boss above you can be a constant fight against procrastinating but the moment I am having a new idea I am getting excited like a kid and can’t stop turning the idea into reality.

To be honest an upcoming deadline (not too far away to procrastinate, not too close to freeze in panic) is a good thing to get me into a creative mode. When Apple asked me to perform at their store in Munich I had 10 intensive weeks of work to bring all my ideas together and finally make decisions where needed.

How important do you think creativity is in life?
Creativity is what brings us further and makes life more colourful, interactive and sometimes even easier. It brings you the freedom of choices.
About
Simon Pierro was born in 1978 in Ettlingen and is a German magician and TV presenter.  He grew up in Waldbronn (Baden-Württemberg), Germany and lives presently in Munich. At the age of 15 he was cheated out of 20 dollars by a thimblerigger on the streets of New York City. As a result of this encounter, Simon’s sister gave him a book about magic and card tricks and it was then that he discovered his passion for magic.

Simon Pierro’s presentations include modern elements of popular culture and have little to do with the cliché of the “magician with tailcoat and top hat”. With his stage show “The American Dream - From Rags to Riches”, developed together with director Eberhard Riese, he has won several magic awards. In 2002, the Magic Circle of Germany voted him “Magician of the Year”. Amongst other successes he became the German champion and award-winner in the World Championships of Magic (FISM). In 2004, he received the Siegfried & Roy Award in Las Vegas Valley, Las Vegas.

Shortly after finishing his studies of Business Administration and Engineering at the University of Karlsruhe, Simon was invited by Frank Elstner to his TV show “Menschen der Woche” (People of the Week). Afterwards he was also chosen to perform on Elstner’s Saturday evening show “Verstehen Sie Spaß?” (the German equivalent of Candid Camera), where he earned his own part as magic decoy and has since played magic pranks in more than 20 episodes to date. Apart from other worldwide TV appearances he also works off-camera as a consultant. He even developed an illusion for Heidi Klum’s Germany’s Next Topmodel. He also presented the IFA show “Connected World” of the Deutsche Telekom in Berlin. Since 2008 he has been heavily involved in digital magic, a combination of magic and technical innovation, practically inventing the genre of iPad Magician. With video clips such as Preview on iOS 5 and iPad Horror, he has reached more than 10 million viewers in less than a year and was the first German magician to be invited to an Apple Store. In 2013 he became the Official Angry Birds Magician.