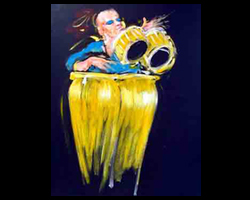 What do you think being creative means?
Conjuring up and shaping something to tangible form of worth from inner feelings/impulses to a life outside oneself.

How do you include creativity in your life?
My big passion is the piano which I tend to work at straight after breakfast most days when I can. Often I begin with classical pieces to help with technique and also sightreading. Then I work on my own pieces.

By having this routine and also by not having routine. By application of practice and becoming more musically-minded. By improvisation - something like fishing - casting your line in the water, hoping you might get a bite and catch a fish. That is, by application, and now and again the magic comes - in the form of a phrase or a chord or sounds that strike strong emotional accord. You know when it hits, and you’re off on another adventure, listening inside and trying to capture the sounds you’re hearing and hope you have the energy to see it through while you’re in the fever!

What thoughts do you have as to how your life has influenced your creative imagination, and how your creative imagination has influenced your life?
I find myself driven to translate feelings into music - a form of alchemy wherein I create my own treasure. Without this I can feel poor in spirit and lacking in meaning. My pieces are my most valued possessions. Sometimes a healing process - a form of therapy wherein I transform, feel stronger. A sense of triumph, to have made something from myself - to have conjured something up out of nothing. Alakazam!

What, if any, exercises do you do to get into a creative mode?
Application - improvisation - doodling, fishing, reaching. I throw my line in the water. Days, sometimes weeks/months go by without a bite, then BANG! - the game is afoot.

How important do you think creativity is in life?
The feeling of achievement is a blessing, it sets you free, makes you happy. Expectation of new adventures into the unknown and the mystery treasure that’s in store is sustainingly exciting (sounds like Indiana Jones!). It gives one focus, health and happiness.
About
Si Wharry was born in London in 1954. He started musical life as a singer in church from age 10-13, “my first professional gig! a penny per rehearsal, tuppence a service and half a crown for a wedding”.

He learnt orchestral percussion and self-taught piano through his teens. At age 16 he saw Vibraharpists Red Norvo and Gary Burton playing together and knew vibraphone was it for him. He built a scale model of one out of wood through lack of cash and aged 19 bought his first proper set. At the same time his interest began in Latin and world percussion. Later he studied flute and saxophone with Andy Hamilton and Steve Ajao. Si’s first engagement was for Scope jazz/rock orchestra playing twice nightly shows inside a structure built for the projection of laser light shows. He has been performing continuously in working bands since then for the last 35 years and been a member of: Caliche (Chilean band playing traditional Andean instruments); End of Chat (Jazz fusion led by Graeme Hamilton of Fine Young Cannibals); Herbie Hancock; Blue Pearls Big Band (playing flute and alto sax); Bleep Bop (Swing to Bebop three saxophone and vocals septet); Vamos (Afro-Cuban Jazz); Wade Austin’s “Night Drive” (steel pan-led Caribbean Jazz fusion); Root Juice (Jazz fusion); Blue Earth Nomads (world music fusion); and Thabani (Afropean Soul and Funk).

“I love to play piano and form my own compositions - a mixed bag - a surprise package.” He also writes for vibraphone - mainly jazz - and plays conga drums, bongo, darbuka and many and various percussion instruments. He also plays flute.