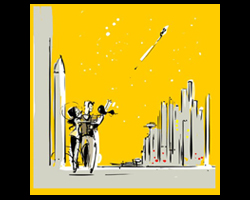 What do you think being creative means?
It’s a way of life. It’s how you approach EVERYTHING - your work, your relationships and friendships, your children, your parents, your place in the world, the walk to the bus stop. If you can access the natural creativity you had as a child and somehow keep it open (a lot of stuff can happen to shut it down) as you grow up, you’ll probably be okay.

Being creative means looking the world in the eye and seeing it for the first time every time; it means being god with a small g because you get to make something new where there wasn’t before (although beware of hubris).

How do you include creativity in your life?
I work as a “creative producer” (as opposed to a regular producer whose principal function is to make lists) and writer so it’s a huge part of what I do, every day. I love writing, creating, pitching, adapting, making things. I feel alive when I am being creative so it’s a kind of drug (with the attendant upsides and downsides.) Right now I have two feature films, a couple of television series and a comic-book on the go, all of which I have either created from scratch or participated in the creation of, so I’m very fortunate to have this creative impulse.

Being Managing Director of my company means I often have to work as a regular producer, too.

What thoughts do you have as to how your life has influenced your creative imagination, and how your creative imagination has influenced your life?
My creative imagination has influenced my life negatively in that I find it difficult to be “normal” for my family, and get the work-life balance right. When you write, or create, you carry a lot of stuff around in your head all the time, even when you are not working, and there have been occasions when I haven’t always been “there” for my family even though I am in the same room. I’m trying to get better at this and it sometimes feels like the biggest challenge I have ever had to face. I have been married 20 years so spare a thought for my wife, who doesn’t work in the creative industries.

I’m not sure how my life has influenced my creative imagination in that I don’t have any regular childhood hang-ups that manifested themselves in the need to entertain others or escape into my own world, kind of thing. Creativity wasn’t a part of my family at all really (working class upbringing, South London, there were no books anywhere) and so I always felt like the odd one out, the one who didn’t really belong there, the one who loved reading and drawing (please be clear that I wasn’t escaping when reading/drawing). I discovered for myself all the art-things I love.

I was affected by punk when it hit England in 1977 and this is probably the most significant influence on my life in that it was essentially a cultural, creative revolution. I still get nourishment from its values, from the way it worked and what it did.

What, if any, exercises do you do to get into a creative mode?
None at all. I don’t need to get into a “creative mode”. If you asked me to write a story right now, I could. I tell you what I did find handy, when my children were growing up, I used to improvise a story to them every night. Sometimes, I would ask them for the ingredients and then include them in the storyline. My favourite was one about a crocodile that chased a boy and threatened to eat him when the story ended and so the boy had to keep moving, keep the story going so as to avoid being eaten.

In terms of other sources of inspiration, I have had dreams that have produced television series, and I sometimes write myself out of trouble in that ideas come when we are running out of money and I feel I ought to create something I can sell.

How important do you think creativity is in life?
I think it is everything. More people are creative than they think but I also have a tendency to romanticise so this may not be true.
About
Robert Chandler is an award-winning writer, director and producer who has created and produced work for broadcasters such as BBC1, BBC3, Disney, Discovery, Five, Radio 4, and for companies such as Electronic Arts, Sony, Red Bee, Shine, talkback Thames, Kudos, Hotbed, Diverse and Tiger Aspect.

Before setting up Space Age Films, Robert was creative director and head of production at Chase animation studios in London. Prior to joining Chase, he produced prime-time television; directed entertainment, history and science programmes; developed feature drama; created and directed comedy for the radio; and, many moons ago, was one of the people who set up the prestigious Mercury Music Prize, where he was its creative director.