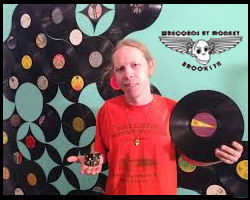 What do you think being creative means?
Being yourself and articulating ideas or feelings through any medium.

How do you include creativity in your life?
Every part of my life from when I wake up to when I go to bed, my entire environment is filled with creativity, creative people and inspiring things.

What thoughts do you have as to how your life has influenced your creative imagination, and how your creative imagination has influenced your life?
I wouldn’t be where I am today without a creative spirit! My godmother got me into sewing and crafts at a very young age and that was my gateway to creativity and why I am where I am today! The problem is there is no off switch, the closest thing I have to that is my wife!

What, if any, exercises do you do to get into a creative mode?
I like to think a lot and talk a lot and always a little sketch at the end or during to start off an idea.

How important do you think creativity is in life?
Creativity = Progression = Life
About
Patrick Chirico started WrecordsByMonkey with Brian Farrell in 2004 whilst still studying at the Fashion Institute of Technology. They started making their record bracelets one by one in the hallway of their FIT dorms, hand drawing their own unique graphics directly on the records. Since then, they’ve come up with an innovative manufacturing process and operate out of their studio in Williamsburg, Brooklyn, where they have handmade over 200,000 record bracelets, and have expanded their designs to include all types of jewellery and interior products, such as light switch plates, mirrors, and clocks.

They have grown to become an all-expansive design and lifestyle brand, bridging the worlds of fashion, art and music and currently sell in over 20 states, in places ranging from art museums and design stores to independent boutiques and larger chains.

They have done private label work for companies such as WEA, MTV and the GRAMMY Brand, creating custom record bracelets, graphic design and unique packaging and displays. Over the years they have received press in almost every medium, including the “New York Press”, “Daily News”, “A.M. New York”, “Timeout New York”, “New York Magazine”, “Antenna”, “Elle” and “Rolling Stone”. They’ve also been featured in the book “Red” and their pendants were worn on this past season of the hit TV show, “Glee”. Their pieces have also been worn by musicians like Norah Jones, Hanson, and Mates of State.

Every day, WrecordsByMonkey strives to make their company greener, and with a low carbon footprint. They have saved thousands of records from going into landfills, and will continue to push the envelope on what can be and what has been done with vinyl records.

Apart from his busy schedule at WrecordsByMonkey, Patrick is also the creator/designer of Build Your Block, a pillow company he started in 2010. Constantly inspired by the buildings around him, he wanted people to be able to express their love of architecture and the city by creating their own personal blocks in their homes. People can pick and choose the colours and styles that most inspire them, and make their own neighbourhood on their bed or couch.
Policy
© Danielle 'DMo' Oke. All rights reserved.  Art it up!