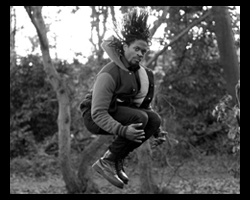 What do you think being creative means?
I think that being creative means opening yourself up to an endless array of possibilities, from the conventional to the obscene, and constructing those possibilities in order to bring an idea, feeling or moment to life in a way that connects yourself to the world or the world to yourself. In short, stretching your imagination past its limits!

How do you include creativity in your life?
Creativity is a part of my everyday life and not as a choice. It's a very natural inclusion rather than a forced one. I don't know if it was something I was born with but I can't think of a day where I haven't thought about a moment, situation or image in a creative way. Just as much as breathing and eating, I can't get away from it, and even if I find a moment of silence, it only ever really lasts a minute or so before I'm eager to create again. Once you are able to daydream you find new possibilities and opportunities within every part of life to be creative. It can at times be a burden but a burden that can formulate a complex but engaging mind.

What thoughts do you have as to how your life has influenced your creative imagination, and how your creative imagination has influenced your life?
My Mother, Yvonne and Godfather, John are the people I feel have influenced my creative abilities the most. Whatever I wanted to try, whether it be sports, magic, juggling or dance, I was supported tenfold. I was given every opportunity to explore the possibilities of growing within a wide range of activities while also experiencing the possibilities of performance and creative processes. I know that this inbuilt need to explore new territories and challenge myself has stayed with me right up until this day.

The way my creative imagination has influenced my life? Well, I haven't had a single job that wasn't in the artistic sector. Which has its pros and cons but what more could I ask for? To be able to do what I love everyday has kept my soul fulfilled and my heart beating. Whether it has kept my bank account healthy is another subject all together. All I know is that when I'm sad, I create. When I'm happy, I create. When I'm bored... you know where this is going.

What, if any, exercises do you do to get into a creative mode?
I like the standard write all your ideas onto a piece of paper and make sense of it all later. Long walks also help free the mind to wander alongside your feet. Watching other artistic work also keeps me inspired.

How important do you think creativity is in life?
Creativity isn't just limited to the performing arts sector, it is a very important part of life and allows us to bring beautiful ideas and choices to a purposeful fruition, no matter who you are or what you do. Personally, I don't know where I would be today without it as I feel it is one of the few things that is keeping me alive.
About
Omari ‘Motion’ Carter has been independently choreographing, performing and teaching dance within hip hop culture for the last 7 years and is passionate about fusing his own idiosyncratic movement style with different cultures and traditions, while also furthering his own practice of Screendance, through ever-growing collaborations with filmmakers, dancers and other interdisciplinary creatives.

From his experiences in hip hop and contemporary dance, Omari has become a very versatile dancer and choreographer, taking influence from many of the artists he has come to work with over the years. Including renowned choreographers Rosemary Lee, Thomas Kampe, Bim Malcomson, Alesandra Seutin and Vicki Igbokwe.

Currently working as a performer in the West End production of 'Stomp!', Omari has also recently worked as a filmmaker/curator for BCTV, the fresh new YouTube channel for hip hop festival, Breakin' Convention at Sadler's Wells Theatre.
About | Connect | Store | Policy
© Danielle 'DMo' Oke. All rights reserved.  Art it up!