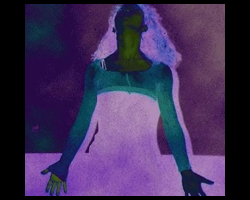 What do you think being creative means?
Being creative is to enjoy what the Creator has given us. Each of us has a specific gift - using it and being ourselves, that’s pure creativity.

How do you include creativity in your life?
I have been very fortunate in my life, because much of the work I have done has had to do with creativity. I have noticed that when I’m not being creative, I feel “turned off” and unsatisfied. So, seeking to include creativity in my life is what I do. I try to do what I love as much as possible. I surround myself with people I love that stimulate me. I also do things like, listen to music, move, make something, read something that gives me inspiration, watch a movie, or just walk along the river to the Tate. I feel it’s so important to find time for yourself, to enter “your” world where you express yourself.

What, if any, exercises do you do to get into a creative mode?
I don’t really have exercises that I do. Going to see dance performances, musicals, exhibitions, etc. are all things that inspire me. Projects come even just from talking about ideas with friends. Music has always been a great catalyst for me.

How important do you think creativity is in life?
I think creativity in life is very important. It’s actually what makes you keep going, keeps you alive inside. No matter what you do in life or where you live, it is your spirit taking form.
About
Monica Brunello was born in Malo, Vicenza, Italy and is a dancer, performer and founder/practitioner of Rei. She is also a qualified Reiki teacher/therapist.

Monica has been dancing since her late teens, first performing in her native Italy in places such as Teatro Pasubio, Teatro Astra, Piazza A. Rossi, Teatro Roma and Festival Bassano/Castello degli Ezzelini; and later across London in venues including the Royal Albert Hall, Royal Festival Hall, Tabernacle Theatre, Holland Park Centre Gallery, TESTBED1 and Valentines Mansion & Gardens. She has also participated in the Dance Umbrella Festival, the South Bank Summer Festival, the One World Festival and the Big Dance Festival.

Monica began her Reiki journey in 1995, and went on to research many other movement/energy practices before developing her own movement practice called Rei. Monica has dedicated a large portion of her life to movement, energy work and healing in order to offer others a creative way to understand their body. She has delivered workshops in Rei in the UK, Italy, Australia and Belgium.

She also utilizes these skills in the world of dance and movement performance, where she works with Rei as her base to create her artistic pieces. Her work has included multimedia collaborations that have merged dance with architecture, film, visual art, poetry and music. In 2014 she officially launched ReiMoves, a Rei movement performance group based in the UK.