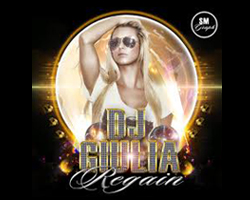 What do you think being creative means?
For me creativity is a gift that must be grasped, that sooner or later we all receive from life for several reasons. There are some who are more susceptible to developing knowledge, there are those who like many artists make it the basis of a job, and there are those who are not afraid to put it into practice…I think that creativity is a starting point to begin an inner journey of discovery, art, originality and evolution. Also, I think it’s even more rewarding when you can share your creativity with the world. And it is a point of arrival when it has really helped create something new and evolving for that person or for all people.

How do you include creativity in your life?
Whenever I feel a pleasant idea, accompanied by a positive feeling and energy that makes my body vibrate, “I listen to myself and I apply it into practice”…starting with the simplest things, such as when writing an email, or when deciding my look, etc. to the real projects of my life as it was for “SATIN GIRLS”, “SPAPARTY”, “THE PERFECT MIX DJ”, “UNA VITA DA DEEJAY” and “TECH SEX HOUSE”, or for my musical productions and DJ sets, etc.

What thoughts do you have as to how your life has influenced your creative imagination, and how your creative imagination has influenced your life?
My creativity is very svilupata, maybe just because I let it “free to express itself” in my daily life without filters, especially social or stereotypical. It helps me to look to the future and go beyond...I find that creativity and life are “THE PERFECT MIX” to be able to still amaze and surprise oneself.

What, if any, exercises do you do to get into a creative mode?
Sometimes I feel the need to isolate myself, to be in silence, to be in contact with nature, especially seeking the light of the sun or the moon and fresh air, and I have the utmost concentration and devotion to a topic. I also noticed that my mind and my spirit are more creative at night, in absolute silence. But I happen to be very creative even during moments of absolute chaos while amongst people to talk to, and from speech and other reflections, a light bulb turns on inside me. There is no rule, but there is an open mind that seeks, captures from the world and continually monitors.

How important do you think creativity is in life?
I’ve made it the essence of my life to always have renewed energy, life goals, moments of joy and strength and my personal evolution as an artist, as a deejay and producer, and as a woman. My concept “REGAIN” significa per me “Restart” thanks to a new creative idea, whatever it is and wherever I can bring it...no limits to creativity.
About
Giulia Regain is an international DJ, producer, remixer and blogger, revered for being at the forefront of DJ technology and product-awareness. She is currently ranked as one of the top 3 female DJs on the French website djette.com. She is also the DJ Ambassador for Pioneer Italy and has been since 2009 when they discovered her in Portugal after winning the Pink Armada “Top Female European DJ Award” and “Best Female Italian DJ”.

As a producer and remixer, Giulia has created more than 50 songs on iTunes and Beatport in many genres including electronic, house, progressive, deep, chill out, lounge, and three mix compilations. Her signature style is an international sound that she defines as “ELECTRONIC DANCE mix HOUSE MUSIC” with inspiration from the American and Northern European groove. Her first album “FEEL IT” was released on vinyl in 2007.

Her DJ sets are broadcast on various radio frequencies worldwide, on web-radio, and on the emblematic “Soundzrise: the sounds of dawn” program on Italy’s #1 music station Radio M2O: www.m2o.it

The early days saw Giluia playing house music vinyl before moving on to creating her own style “Tech Sex House” by switching to Mac and the last generation of CD player, mixer, FX and controllers in the electronic dance/house music radio and clubs. Since then she has played in Italy’s best clubs from Riccione to Milan, and on international tours in Ibiza, Mykynos, Miami, New York, Geneva, Greece, Mauritius, Mexico, Portugal, Switzerland, France, Germany, Tunisia, Morocco, Albania, Lithuania, and more…

Besides music, she loves fashion and in 2011 she founded the blog “THE PERFECT MIX DJ” as a DJ and huntress of the hottest trends in a fusion of music, fashion, night life, events, movies, technology, cars, motorcycles, sports, food and drink, wellness, makeup, art, and curiosities. With a style that is a glamorous mixture of Italian and American trends, she is the ambassador for many brands of fashion, hairstyle and make-up, and has performed events for Rolex, Maserati, Mercedes Benz, Campari, Aperol, Martini, Nastro Azzurro, Philip Morris, Golden Point, Levi’s Jeans, Bfly Wear and “Fashion Night” in Rome and Milan. She also created the “Spa Party”, staging exclusive parties in spas, resorts and luxury hotels, in collaboration with THE SATIN GIRLS SHOW (a live DJ show she created in 2007 based on femininity, elegance and sensuality) and Pioneer: www.spaparty.it

Giulia has worked as a presenter on TV and radio, and as a VJ in concert presentations. She has a background in dance and music, specializing in classical guitar. She is an IT expert and has a degree in Social and Behavioral Sciences (University of Psychology of Cesena, Italy).

In 2013 she opened her YouTube channel “GIULIA REGAIN TV” with the new format “UNA VITA DA DEEJAY”. Her motto: “Even in the beating of a butterfly’s wings there is music. Just know how to listen.”
Policy
© Danielle 'DMo' Oke. All rights reserved.  Art it up!