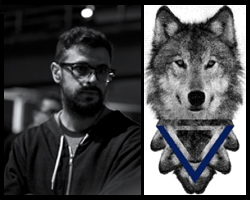 What do you think being creative means?
Being creative is the skill of using a thought process along with the abilities of the person till all the resources possible are seized, to find in that singularity a fissure. An escape out of the commonplace. And be able to finalize that process transforming the idea into a language: literature, film, medicine, architecture. It could be applied to everything. Being creative is the capacity to diverge, of taking the incorrect option. Fromm says: “creativity requires the value of letting certainties go”. There is in the creative instinct a power of destruction above the presets that conduct you to act.

How do you include creativity in your life?
I always try to be open to the impulses, to induce myself with things that shake me. To be hungry for music, art, for singular people, honest people who have something to tell. That’s what moves me to sit and write. To burn.

What, if any, exercises do you do to get into a creative mode?
I like to strangulate the idea through thinking, till I finally asphyxiate it. Just then, I sit and write. The exercise is the writing itself. Sharpen the idea till the blade can open the belly of a trout with just one cut.

How important do you think creativity is in life?
Being creative gives you the opportunity to be closer to freedom, like having an amplitude of debris (possibilities) to hold onto if you were in a shipwreck.
About
Francisco Joaquín Paparella was born in Buenos Aires, Argentina in 1984. He moved to Patagonia at the age of five, and he spent his whole childhood and adolescence in a mountain valley. He left his hometown at the age of seventeen to study in the CIEVYC film school in B.A.

After his degree, he moved to Mexico City in 2007  to live and work  there. In 2009 he established his  independent  production  company Río Azul Films, through which he produced in México FINDE, directed by Matías Penachino, and ÁNIMA from Antón Terni. In 2010 he executive produced ENERO, from Cynthia Gabrenja and Marcelo Scoccia. A trio of operas primas with presence in international film festivals.

In 2012, he directed QUITRAL, a short film about a Chilean going up to the mountain to his parent’s lands. The film was awarded Best Director & Script in Festival Audiovisual of Mercosul, and selected in competition in San Francisco Latino Film Festival 2013 and Lakino Berlin FF 2014. In 2013 he directed, wrote and produced ZANJAS, his first feature, in the Argentinian Patagonia. A portrait of Zamora, a rural worker, in a town suffering feminicides of teenagers thrown into ditches once dead. The film premiered at the Raindance Film Festival London in 2015, it was also selected in Guadalajara Construye 2015, and won the 2nd Prize in Guanajuato International Pitching Market 2014.
​
Paparella is now pursuing his most ambitious project yet, SUDESTERN - a modern western based on a true story, about Butch Cassidy & the Sundance Kid living in Patagonia in 1901. The project won the Park Avenue award at the New York Screenplay Contest 2013 & INCAA’s subsidy for first and second films.

Walking a thin line between realism and fiction Paparella is defining his style and identity as a director. He strongly believes in the power of sordidness and viscerality as a way of telling stories.