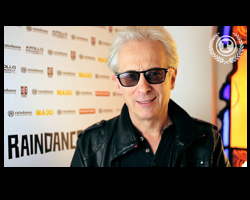 What do you think being creative means?
It’s pretty easy to get seduced by the idea of a ‘being creative’ - and by that I mean getting carried away by all the trappings. Living the life of a dilettante I suppose is another way of saying it. Being creative is to see life and reality through a filter and reinterpreting and expressing what you see in order to give life new meaning. I also think that there is no such thing as ‘creativity’ in the sense that I believe everyone is brought into this world with an equal amount of ‘creativity’. But what distinguishes Hemingway, Mozart and Picasso from a mere mortal like myself, is how they developed a plan of attack, a work flow if you like, to get those great ideas out of their heads and onto paper or canvas.

How do you include creativity in your life?
I think the word ‘try’ is important, because most days I fail to include enough creativity in my life. When I am in flow, I try to approach the problems I encounter as creative opportunities, and try to combine practical and pragmatic reality with the challenge of finding bold, fresh and original solutions to these problems.

What thoughts do you have as to how your life has influenced your creative imagination, and how your creative imagination has influenced your life?
I chose a difficult route when I left school and shunned the types of commercial careers which would have guaranteed financial security. Being forced to constantly re-invent oneself under such economic pressure, forces one into the position of becoming resourceful and creative in order to simply survive. This is only possible, I might add, if one is able to reject fear of failure (something which has taken me a long time to overcome!).

The most successful projects and ventures I have completed, be them private or public, have come from my ability at those times to let my mind wander, to edit down those ideas to the simplest possible shape, and then execute a strategy fearlessly. The arrogance of where an artist puts his or her brush is born of fearlessness.

What, if any, exercises do you do to get into a creative mode?
I learned a long time ago the power of alpha state and spend at least an hour a day walking during which time I solve a variety of problems. I also draw relentlessly whenever I can.

When working on a physical project, being a manuscript, drawing, painting or sculpture, there are loads of little tricks of the trade I have picked up from some of the masterful artists I have had the immense privilege of meeting. I worked briefly for the British sculptor Sir Henry Moore, and noticed he walked along the stream that ran through his property in Hertfordshire, and would stoop to pick up pebbles and bits of bone from the abattoir upstream. One morning I was sent into the house to deliver a message and there he was at his desk sketching these simple objects. I asked him what he was doing and he said: “I am building up my vocabulary of shapes.” This has guided and inspired me ever since.

How important do you think creativity is in life?
Our society is showing hallmarks last seen in ancient Rome, when the attentions of that day’s politicians and business leaders turned from the sorts of gifts creative spirits can give, to the cold soullessness of commerce. Rome then collapsed.

No one believes more in the importance of commerce than me. But life needs to be a balance. I think the ancient Greeks had it right with Physis and Psyche - body and mind, body and soul. Without creativity, we have no life. Without creativity there is no mystery. Without mystery there is no magic.
About
Mesmerized by the moving image from a young age, but unable to watch TV or films until his early teens due to the constraints of his Amish background, Canadian-born Elliot Grove followed up formal art school training working as a scenic artist on 68 feature films and over 700 commercials in his native Toronto.

Elliot moved to London in the late 1980’s and founded the Raindance Film Festival in 1993, a festival devoted to independent filmmaking and its emerging talent. It is now the biggest Independent Film Festival in the UK. Following on from this success Elliot founded the British Independent Film Awards in 1998, which is now regarded as one of the penultimate awards in the world film calendar. Honours have included Ben Kingsley and Harvey Weinstein, and it helped launch countless films including 2008’s Slumdog Millionaire.

Raindance set up the Independent Film Trust in 2006, a charity to help support the film festival, the BIFA awards, as well as film training for disadvantaged kids. In 2007 Raindance.tv was launched, Britain’s first IPTV service which currently has over 400 hours of independent shorts, features and documentaries.

To date Elliot has produced over 150 short films, and 5 feature films. He has written eight scripts, one of which is currently in pre-production. His first feature film, TABLE 5 was shot on 35mm and completed for a total of £278.38. His 2005 production “The Living In The Home Of The Dead” an arty British Chiller, won 17 international awards, and has sold widely.

He teaches in the UK, Europe, Japan and America, training thousands of new and established filmmakers in all aspects of film. Among his high profile alumni are Christopher Nolan (Batman Begins), David Yates (Harry Potter), Guy Ritchie and Matthew Vaughn - who actually met at a Raindance course, and Edgar Wright - who was his first intern.

Elliot has written three books which have become film industry standards, and was awarded a PhD in 2009 for services to film education. His novel “The Bandit Queen”, based on his experiences on the Ogaden Desert as a child, will be illustrated by Dave McKean.

Aside from his endeavours in film, Elliot is an accomplished artist specializing in sculpture, sculptural painting and illustration.