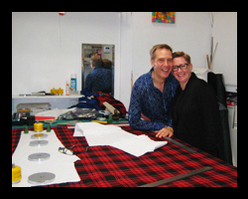 What do you think being creative means?
To go with the * vibration and live by it, try to see the world as visual as it can be.

How do you include creativity in your life?
As in the first answer…We live by the * vibration and not by what the world likes us to see.

What, if any, exercises do you do to get into a creative mode?
Meditation

How important do you think creativity is in life?
Creativity is life for us, without it there’s no point, we would become like most, robots or zombies.

* vibration = put your hands to the ground and feel it.
About
In the mid-80’s both Els and Henk finished their studies at the Academy of Arts in Amsterdam. After which Els started working as a knitwear designer, and Henk went to Italy, working as a prognosis designer. At the end of the 80’s Els and Henk met and didn’t want to work alone anymore, deciding they wanted to work together, as well as with other people.

They started their company at the beginning of the 90’s, mostly making clothing and costumes for major operas and ballets, including productions at the world-renowned La Scala, Milan, as well as for movies. Today they undertake a mix of making and designing clothing and helping fellow designers to get the most out of the moment.