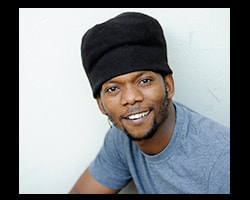 How do you include creativity in your life?
Every time I'm even walking I'm very observant, how someone is standing or the conversation they're having. Every day, in day to day life there is street theatre, you know when normal people are walking it's a performance on its own.

What thoughts do you have as to how your life has influenced your creative imagination, and how your creative imagination has influenced your life?
It is without doubt what I do. I would not want to do anything else. It has really done a lot to get me outside the house so it's a good influence. Getting out the house and going to enjoy what I do and sharing it. For me it is not even like a job, being Artistic Director and Choreographer is fun. I am lucky to enjoy my job.

What, if any, exercises do you do to get into a creative mode?
I have to be observant all the time, in my head, sound wise and music wise. Again when you're walking around, the birds and everything is a potential to be creative. I also find spirituality gets me thinking creatively.

How important do you think creativity is in life?
I think it's very important and we have it from when we are born. Having your own imaginary friend that you can play with, kids can play with their own imaginary friends but somehow when we grow we start losing that special part of the brain.
About
Bawren Tavaziva grew up in a rural village near Masvingo in Zimbabwe. Football, Michael Jackson, New Edition and Kung Fu movies viewed at the local community hall provided inspiration to Bawren and his friends. Bawren's musical talents also developed at this time on a guitar made by his brother from a 5 litre tin can and fishing wire.
​
At the age of 12 Bawren Tavaziva attended an outreach ballet project with the National Ballet of Zimbabwe at his local community centre. From day one, his determination and talent led him to a life-long passion for dance. He danced with Tumbuka for five years and toured Africa. He came to England to join Phoenix and Union dance and in 2004 he presented his own choreography and music as a finalist at The Place Prize with a deeply moving quintet entitled Umdhlalo Kasisi, in memory of his sister who sadly died of HIV.

After this, Bawren formed his own company and became Artistic Director of Tavaziva Dance and in the same year won a fellowship with Dance of the African Diaspora’s Trailblazer programme. He went on to produce further works for his own company, Soul Inspired 2005, Bophelo 2006, Chatsva 2007, Heart of Darkness 2009, Wild Dog 2010, Double Take 2011, Sensual Africa 2012, Greed 2013, Tavaziva Ten 2014, Africarmen 2015. Bawren has embarked on various research trips to Africa, most recently visiting Ethiopia in 2016 to explore the spiritual and cultural heritage of the Rastafarian movement.