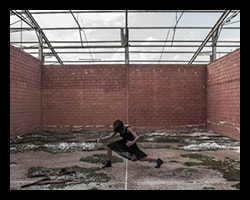 What do you think being creative means?
To give space for any interaction with yourself and with others, to let a little seed grow, an idea, an action, a dream, a hidden desire. Humans are creative creatures, 'cause they have an inner force that drives them, but also many unfulfilled desires. This is the inner space for creativity to grow and to be present.

How do you include creativity in your life?
Creativity has potential to grow, when I am open for things, when I search for dialogues and exchanges, when I observe, hear, think, question, doubt. When I watch children play, being alert and so alive in each moment, they let themselves free in the absolute moment.

What, if any, exercises do you do to get into a creative mode?
I’m trying to be as spontaneous and honest as I can and not to be prepared for things to come. We have to accept the unexpectable.

How important do you think creativity is in life?
​Creativity is the air we breathe, without fantasy and creativity life is meaningless and unbearable. To create is the only essence in life, even if life doesn’t make any sense.
About
Athanasia Kanellopoulou is an independent choreographer, pedagogue and performer. She has studied with a scholarship classical and contemporary dance in London and New York, and Spanish Literature and Culture.  For over 17 years she lived and worked in Europe with artists and companies  such as:  Les Ballets C de la B, Tanztheater Wuppertal Pina Bausch (guest artist), Cocoondance, Alexandra Waierstall, GregorZoellig, In jung Jun, Guy Weissman, Rami Levi, Jossi Berg. Since 2008 she has developed over 17 works presenting them in numerous festivals in Europe, the Middle East and North Africa.

Her research has been affected  by the evolution of ideas about female identity and in general the female figure through the past decades. She has been invited to deliver workshops of contemporary dance technique, choreography and improvisation at companies and dance institutes in Greece and abroad such as: SEAD Academy, Greenwich Dance Agency, Malta University, Seoul Arts Centre, Cairo Contemporary Dance Centre, State School of Athens ( KSOT), Iceland Academy of Arts,  Garage 29 Brussels, Dance Cultural Centre, Athens, Mimar Sinan Fine Arts University Istanbul, etc. She has been invited as a guest choreographer by JV2 (Jasmin Vardimon), ZfinMalta Dance Ensemble, Sareyyet Ramallah Palestine, Iceland Academy of Arts, University of Malta Dance Studies, and SEAD Salzburg. Since 2017 she has been teaching at the Greek National Opera, and in 2018 she founded  the company ‘’Athanasia Kanellopoulou Performing Arts’’.