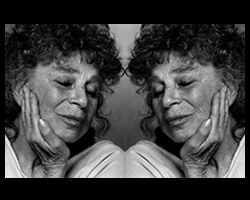 What do you think being creative means?
Being creative has to do with bringing something new using imagination and skill.

How do you include creativity in your life?
Responding to experiences and issues with imagination and originality.

What, if any, exercises do you do to get into a creative mode?
Check in my inner self or take a walk in nature.

How important do you think creativity is in life?
I think creativity makes life richer and more meaningful.
About
Anna Halprin’s diverse career has spanned the field of dance since the late 1930’s, creating revolutionary directions for the art form and inspiring fellow choreographers to take modern dance to new dimensions. James Roose-Evans author of “Experimental Theatre” called Anna one of the most important theatre artists of the 20th century.

Anna founded the groundbreaking San Francisco Dancer’s Workshop in 1955 and the Tamalpa Institute in 1978 with her daughter Daria Halprin. Her students include Meredith Monk, Trisha Brown, Yvonne Rainer, Simone Forti, Dohee Lee, Dana IovaKoga, Shinichi Momo Iova-Koga, Isak Immanuel, G Hoffman Soto and others, some of who have become involved in the progressive and experimental Judson Church Group. Over the years, her famous outdoor deck has been an explorative haven for numerous dancers and choreographers, including Merce Cunningham, Eiko and Koma, and Min Tanaka and Anne Collod who reconstructed Parades and Change; composers such as John Cage, Luciano Berio, Terry Riley, LeMonte Young, and Morton Subotnick; visual artists such as Robert Morris and Robert Whiteman; poets such as Richard Brautigan, James Broughton, and Michael McClure; and countless others.

Halprin is an early pioneer in the expressive arts healing movement. She has led countless collaborative dance programs with terminally ill patients, long committed to a belief in the connection between movement and the healing power of dance. Halprin has also investigated numerous social issues through dance and through theatrical innovations. For the past decade, she has led “Circle the Earth”, a contemporary community dance ritual to confront real-life issues facing participant communities around the world. Her “Planetary Dance: A Call for Peace” between peoples and the earth was staged in Berlin at an event commemorating the 50th anniversary of the signing of the Potsdam Treaty to end World War II, and involved over 400 participants. In 1995, she was invited by Mikhail Gorbachev to present an invocation at the State of the World Forum in California.

Halprin has recognized new directions for dance and courageously followed those paths into unknown territories, ever-willing to adapt her work to the present moment, a philosophy that led to a broad redefinition of dance.

Halprin has created 150 full-length dance theatre works, which are extensively documented in photographs, books and on film. She is the recipient of numerous honours and awards including a lifetime achievement in choreography from the American Dance Festival. She is the author of three books and has released numerous videotapes about her work. She has received numerous honours from the National Endowment for the Arts, the Guggenheim Foundation, the American Dance Guild, and many others. In 1997, Anna received the Samuel H. Scripps Award for Lifetime Achievement in Modern Dance from the American Dance Festival. The Dance Heritage Coalition has named Anna Halprin one of “America’s Irreplaceable Dance Treasures”.

Halprin continues to make revolutionary work exploring the beauty of the aging body and its relationship to nature. Recent works include the award-winning video “Returning Home”. In September 2004, she performed the confronting Intensive Care: Reflections on Death and Dying at the Festival D’Automne in Paris. In 2005 Anna developed a filmed performance called “Seniors Rocking”. In 2006 The Museum of Contemporary Art presented a major one-woman exhibition of her life’s achievements. In 2009 the film “Breath Made Visible”, a documentary of Anna’s life and work, premiered and has since been shown in cities around the world. In 2009 Anna presented “Spirit of Place” a tribute to Lawrence Halprin for his gift to the city at Stern Grove in San Francisco. In May of 2011 she presented “Song of Songs”, the first in a trilogy called “Remembering Lawrence”, her husband and long time collaborator, at her Mountain Home Studio in Kentfield, CA.

Anna continues to perform, travel and teach with fervour. Anna gets the most out of her life, living by her adage “Aging is like enlightenment at gunpoint”.
About | Connect | Store | Policy
© Danielle 'DMo' Oke. All rights reserved.  Art it up!