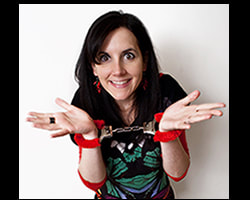 What do you think being creative means?
Creativity for me means to think outside the box, push back the obvious and see things in a different light.

How do you include creativity in your life?
I try to be open in every situation in life and to challenge my thoughts to think of other meanings or a different point of view. Other than that I write every day to work on my craft. I also enjoy brainstorming with other people, and getting inspired by watching shows, traveling or reading.

What thoughts do you have as to how your life has influenced your creative imagination, and how your creative imagination has influenced your life?
As a comedian I am always looking out for jokes - especially in bad or negative situations. I have learned that those situations create the best stories. For example, when I got pulled over by the police and failed the tests to prove I am not drunk - just simply because I didn’t understand what the officers wanted from me - it was really stressful and scary but at the same time my comedy eye was switched on to look out for jokes. I now have a whole comedy routine about this scenario.

What, if any, exercises do you do to get into a creative mode?
Sometimes it does flow and I just need to sit down and write. Other times, when I feel stuck, it helps me to give my day a clear structure, a time schedule and to switch off emails and social media. Most of the time when I get stuck it is because of my inner censor: I feel pressured to create "something great" and for that it helps me to focus on quantity instead of quality. To really get a routine of being creative without judging if the ideas are good or bad and just let them flow.

I also find it immensely helpful to talk to other people. Meeting up with creative minds, brainstorm ideas and talk about projects is a great way to trigger my creative mode.

How important do you think creativity is in life?
Creativity is freedom and power for me. It gives me the freedom to change my attitude and to make use of everything that happens. It makes me active instead of passive.
About
Alice Frick, award-winning comedian and Funny Women Finalist 2012, is an Austrian comedian based in London. She started comedy in Austria and Germany, then spent one year in Los Angeles. She has performed at L-Fest Main Stage, Komedia Brighton, Frog and Bucket Manchester, Comedy Store (Los Angeles), Quatsch Comedy Club (Germany), and was a host of the European Lesbian Conference in 2017.

Her comedy solo show is called “What the Frick?!”, where she chats about being a foreigner in the U.K. and coming out gay to her religious grandmother.

Her v-log, called “Alice in the Wonderland”​, is on youtube: www.youtube.com/alicefrick