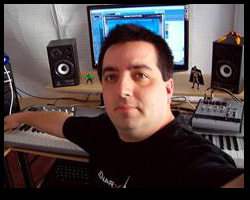 How do you include creativity in your life?
Creativity is in virtually every part of my life. From the music and sounds I create for games, TV, etc, to the way I interact and play with my children. From the stories I write to the way I communicate with other people. It’s really everywhere for me.

What thoughts do you have as to how your life has influenced your creative imagination, and how your creative imagination has influenced your life?
Great question! I pull a lot of inspiration from my personal experiences, especially when it comes to writing my instrumental piano music. I (like most composers) am a very emotional person. Those emotions tend to live right under or on the surface most of the time.

What, if any, exercises do you do to get into a creative mode?
If anything, I try to quiet and clear my mind (as much as possible). Not always an easy thing to do lol! I also seem to be very in tune with sound. I constantly find myself hearing and listening for sounds and music. To the point of probably annoying people I’m with sometimes! :)

How important do you think creativity is in life?
Creativity is vital. It’s like oxygen to me. Truly, I don’t really see a point to life without it.
About
Adam DiTroia is an award-winning composer and sound designer for games, television, film, and other media. Adam started playing music at a young age, influenced by his musical roots with his father, Sal DiTroia, playing session guitar for artists like Billy Joel, Barbara Streisand, Neil Diamond, The Monkees, and many others. It wasn’t long before Adam’s playing turned into composing and creating sounds and effects for online games, commercials and short films.

To date Adam’s credits include creating the music and sounds for: The History Channel, Fox Sports, Spike TV, MTV, KFC, the PGA Tour and dozens of games, apps, animated projects, and more. Adam has been profiled in several industry books and magazines including “The Complete Guide to Game Audio” 2nd edition and has created demo songs and custom sounds for companies such as Cakewalk and Camel Audio.

Adam recently started “Trailer Music A.D.”, a company dedicated to creating emotionally charged music for film and game advertising. A partial list of credits can be found at www.adamditroia.com